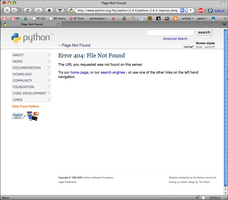 Advertisement
Python is a free, open-source interpreted language that stands out for its versatility in supporting several programming paradigms, whether utilizing object-oriented language or imperative syntax, or using its command line to work in a functional way, as with languages like Haskell.

There are quite a few analogies between Python and the Unix philosophy. Two of its principles are transparency and easy reading of its code. Thanks to this, learning the language is very accessible thanks to its easy use and legibility.

The library modules included on Python include several tools and data structures familiar to any developer: variables, lists, sets, functions, classes, and loops, all thoroughly documented on both its official website and various communities on the web.

Python is an easy-to-use language with a gently sloping learning curve. It uses an elegant syntax that allows for easy reading of the source code. Besides all that, it's multiplatform and easy to integrate with other languages and development environments.
Reviewed by Álvaro Toledo Translated by Taryn
Advertisement

There are opinions about Python yet. Be the first! Comment